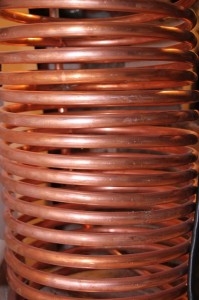 K’2013 Solvay Engineering Plastics have been showing their new efficient fluid barrier which is a material to be used in air conditioning systems. It will be used as a coating to protect aluminium piping which according to Technyl eXten can provide cost benefits as well as ecological benefits to replace the current copper.

David Kim is the CEO and GMS Korea and he has said, “Aluminium has a better surface-to-weight ratio, melts at lower temperatures and is far less expensive than copper. Consequently, we were seeking a coating material to support our initiative for replacing copper by aluminium without trading off these benefits and compromising the high surface quality expected by our customers. END_OF_DOCUMENT_TOKEN_TO_BE_REPLACED

The answer to why they are so heavy is because of the copper that’s inside of them. The systems have three important components including a compressor, a condenser and an evaporator. They are all loaded with copper which is weighs an enormous 558 pounds for each cubic feet of metal – pretty heavy! You may wonder what the components actually do. The condenser helps ready the system’s refrigerant for the cooling process, the evaporator helps cool the air and the compressor helps move refrigerant back and forth between them. These copper components make up almost 60% of the weight of the air conditioning unit!

Copper is the number 1 choice among air conditioning manufacturers as it’s abundant, a good conductor of heat and it’s relatively inexpensive which enables us to have access to cheap air conditioning units to help keep us cool in the heat.

With air conditioning units being around for some time, we would have thought that lighter, smaller, powerful units would have been invented by now. However, engineers are more interested and focusing on making the units more environmentally friendly. A technique called ‘dew-point cooling’ is being experimented on at the moment. Rather than using fossil fuels, this technique relies on the natural energy produced by evaporating water. Greener units may become available in the future, but it’s not clear if they’ll be significantly lighter.