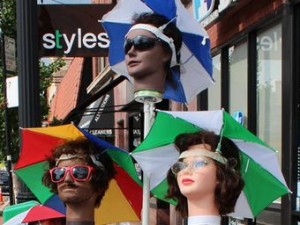 You have probably read our blogs on the air conditioned trousers and the air conditioned suit that is encrusted with diamonds; we have found a few more weird and wonderful inventions to keep you cool during the summer months! Although, if you are looking to maintain your street cred, these products are not advisable.

There is nothing better than coming home after a day at work and taking your shoes and socks off. Well now you can have this feeling all day long by investing in an air conditioned pair of shoes. They are made of leather and have vents in the soles of the shoes, however, the only worry is will these vents suck up dirt from the pavement? If so, you might end up with cool feet but look like you have been walking through a dirt track with no shoes on! END_OF_DOCUMENT_TOKEN_TO_BE_REPLACED

Consumers in the UK need to be weaned off their addiction to TVs, PCs, laptops and fridges if emission targets are to be met, say the Energy Saving Trust.

We may already be conscious about turning off the lights in unused rooms, switching off appliances at the plug socket and having quick showers, but according to a report on UK home energy use, our obsession with gadgets means energy bills and emissions are still rising.

The Energy Saving trust, an independent organisation that advises on saving energy and lowering carbon emissions, say that the UK’s target to cut domestic electricity emissions by 34% by 2020 will not be achieved if we carry on with our love for gadgets and appliances such as cheap air conditioning units, tumble dryers, smartphones and electric toothbrushes.

Dr Paula Owen, the author of the report The Elephant and the Living Room, says “If we look over the last five years a lot has changed and a lot of progress has been made making the most energy-sapping appliances more efficient, “But where we still have a long way to go is with our gadgets and home entertainment appliances, which are using more and more electricity.”

Owen says that our desire for having new gadgets like fuel guzzling extra large fridge freezers and the latest laptop or flatscreen TV is pushing up already costly bills at home and making carbon targets increasingly unachievable.

She said, “What amazes me is that you wouldn’t buy a car without taking into consideration how fuel-efficient it was but people will buy electrical products without thinking about how much it is going to cost to run them”.

Owen explains that, “As energy prices continue to rise they are eating up more of our money. People need to be more educated about what these gadgets cost.”

According to the report, the number of domestic appliances and gadgets in the average UK household increased by three and a half times between 1990 and 2009 and the overall energy consumption from household electronic devices increased by over 600% between 1970 and 2009.

However, Owen states that progress has been made as the traditionally known energy guzzling appliances are becoming more efficient, like fridges and lighting.

The report suggests that more needs to be done to help consumers make the right choices so emission targets can be met. Owen says, “To achieve our targets for 2020 we are going to have to try harder… if we continue like this we are not going to make it.”

For those of you who turned in to Stephen Fry’s Channel 4 count down of the 100 greatest gadgets, and watched it until the end, would have discovered Fry’s number 1 greatest gadget ever to be the cigarette lighter. It took 3 hours for the number 1 gadget– I could see why Fry chose it as the greatest gadget, but it was a bit of an anti-climax for someone who doesn’t smoke.

“It’s not the order in which things are invented that makes them the most impressive, it’s the importance they have to humanity. So my number one is this: fire with a flick of the fingers,” Fry explains.

Other gadgets in Fry’s list included the Nintendo Wii, telephone, kettle, karaoke machine, iphone, ipad and ipod, which made some people to believe that the TV show was sponsored by Apple.

We were surprised that air conditioning was not seen on the list of the greatest gadgets, however, the fan came in number 68, which shows people do appreciate keeping cool in the UK! One of the fans that were mentioned was the innovative Dyson bladeless fan.

There are many polls and countdowns on Channel 4, which are usually open to public voting beforehand, however all the gadgets for ‘Stephen Fry’s 100 Greatest Gadgets’ were chosen by Stephen Fry himself, as the title of the show suggests.

People who watched the programme may be been unsure what Fry’s definition of a gadget was as among the list was a corkscrew, whistle and a pen.

What is your favourite gadget?